The Things I See - Interpretations Of The Music Of Allan Holdsworth 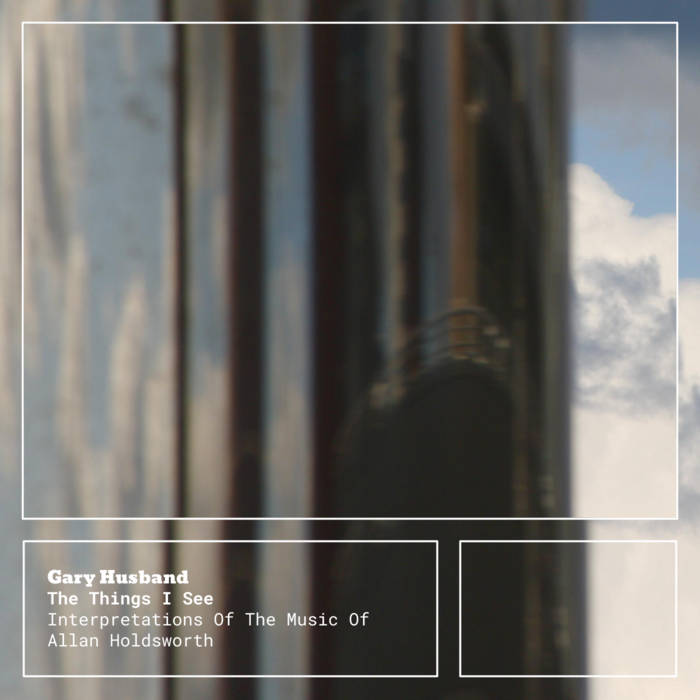 jojena (as fan) This album has been and still is - in lack of a proper English word - an Ereignis. Great to be able to get a refined, remastered version in a medium which implies proper revenue for the artist and makes sure you can listen to in the classic album format, which is the electrified version of the old bourgeois concert situation. Holdsworth‘ music is deeply rooted in late 19th century European art music AS WELL and this aspect shines through in this recording in particular - like a diamond actually

wadcorp Totally fresh & new take on the music of Allan Holdsworth. You will hear these tunes in a totally new way. Favorite track: The Sixteen Men of Tain.

mikkelgrumbovin I love Gary´s Interpretation of Allan´s tunes , for the involment, the deeprooted feelings of sadness and joy , that can only reallly come from a musician with an intimid knowledge of allan´s music like the drummer of his band , mr Gary Husband,-

Sven B. Schreiber (sbs) Without any doubt, Allan Holdsworth was one of the most creative composers and guitarists ever, having created his own unique guitar sound as well. So why not perform a tribute to him... but on piano?! As it turns out, this instrument is an ideal carrier of Allan Holdsworth's spirit, thanks to Gary Husband's ingenious mind. A great addition to my collection of fusion albums!

michael63 Just purchased this album from Maestro Gary Husband . Was I surprised how fantastic it would be ? honestly no . Did he surprise me none the less with how beautifully , and with such tenderness he interprets these fabulous works ? Speechless . It has all the musical colours under the rainbow . From sunshine to shades of melancholy but all intertwined .
Thanks Gary for this beautiful gift to those who have been touched by this music over the years, and for future music lovers yet to discover it Favorite track: Kinder.

This was the first in a series of two “interpretational” endeavours to creatively explore and investigate ways the imagination of a chosen artist meet can meet my own. For this album, the music of my brother and musical partner Allan Holdsworth is represented, redeveloped in entirety from a mere melody line or motif in varying degrees and significantly added to with supplementary original composition. It’s an album born of the mutual closeness I shared with Allan over a 37 year affiliation, and one which I hope will always serve as a loving tribute to my late, extraordinary friend.

I will add that the ambitious nature to these representations and arrangements were completely in line with how Allan always wished any “cover” of his music to be realised - with fresh imagination, and corresponding with a very personal creativity unique to (and within) the artist embarking on such a quest.

The CD version of this old recording appears to be no longer! I wasn’t even informed! To my dismay I discovered it can only be purchased for a somewhat extravagant sum in the form of a used copy on eBay or some such location. Great shame. Therefore, I will claim, here is the definitive version, in the medium we seem to have available to us - lovingly optimised and remastered by the great Markus Reuter.

It is my wholehearted wish you enjoy it.

“Gary Husband is a true friend and has been for over twenty years.

Since we met, I have always thought of him as a musical and spiritual brother. He is one of the most talented and original musicians I have ever had the pleasure of making music with.

When I heard Gary was going to make a recording of some of my music, I was, of course extremely flattered. But upon hearing it, I was moved to tears. This recording is beautiful, magic. Absolutely true to the spirit of the music

Not only does he showcase the compositions in a very beautiful and classical way, but more so and without a doubt, showcases his truly amazing talent. Thank you Gary Husband so very, very much.”

“It has been a considerable time since I heard a truly new kind of recording. This is one of those, and in addition it is from a musician whom I have known and admired for many years, not for his wizardry at the piano, but for his artistry at the drums! As a musician for the great majority of my life, I can inform you that this is no small accomplishment. In this recording we hear him playing the music of another innovator, guitarist Allan Holdsworth, whom he has accompanied at the drums for many years and is intimately acquainted with his music. I recall a concert of Allan in London some years ago, and after the performance I went to see him backstage only to tell him that if I knew what he was doing, I'd steal it! The guitaristic prowess of Allan is well known amongst the musical, and particularly, the guitar community of the world. Along with his mastery, his musical conceptions and compositions are equally well known and admired. It is perhaps the marvellous combination of Gary's immense musical talent as a pianist, and his knowledge of Allan's strange and beautiful music from the point of view as a drummer who knows so well the rhythmic intricacies of his compositions that make this recording so appealing to me. Thanks Gary!”


“The best interpreters of standards are able to go directly to the essence of the material and, with a combination of stream-of-consciousness thinking and careful consideration, turn it into something new every time it is played. Husband accomplishes the same thing with Holdsworth's compositions, proving that Holdsworth's writing, while it may never elevate to the level of “standard,” is clearly worth visiting in a more open and expansive way. Maybe it's because Holdsworth is so careful at crafting his tunes that people can't see past the detailed arrangements to the broader potential of the material, but Husband clearly does, and hopefully The Things I See will encourage others to do the same.”

John Kelman, All About Jazz


“This sharply focused album is made entirely from "Interpretations of the Music of Allan Holdsworth", 10 tracks of solo piano played by a musician at the height of his powers... The result is a terrific album, full of flights of virtuosity, clever references to the jazz and classical repertoires and plenty of sonic surprises... Husband has taken possession of [Holdsworth's] music, but in the friendliest possible way.”


“You don't have to watch Gary Husband at work for long to realise that he's the kind of artist who pours every personal resource he can tap into his intense and passionate music... Husband is now widely credited for the brilliant pianist he is, and brings out the best of Holdsworth's composer's imagination... Remarkable virtuosity allied with sensitivity.”


“A quantum leap for the drummer/pianist. The originality of the melodic and harmonic content is remarkable... establishing a parallel version that stands up in its own right. This is not only a brilliant piece of creative piano work but an excellent example of a tribute project that adds to the subject-matter.” Brian Priestley, Jazzwise Magazine, September 2001


“Husband, quirky and totally open to the inspiration of the moment, is an original... The results here are absorbing and impressive.”


“[Husband's] considerable dexterity and fluency, his pianistic elegance and sureness of touch make this album such a memorable exposition of Holdsworth's celebrated approach.”


“Multi-instrumentalist, multi-genre-busting musician Husband takes a plaintive piano stance on some interesting music composed by an able purveyor of electric fusion. The result is music as ethereal as Keith Jarrett's and grounded as Geoff Keezer's.”

C. Michael Bailey, All About Jazz Magazine, US (Online), August 2001

All arrangements and performance: Gary Husband - Piano, “in piano” percussion, bells and vocals.

Optimised and remastered by Markus Reuter, 05/2021